Alia Baroque, the creator of Fallen Gods Inc., sim builder and sponsor of Sanctum, shares with us the process of creating Fairelands, the story behind Sanctum and his vision of the Faire, his reasons for returning to the Fairelands year after year.

You are one of the true Faire veterans, your builds have been a part of the Fairelands for many years. You create a whole sim — a fantasy world — out of nothing in a short span of months and nerves. How do you do it every year? What makes you return and do it all over again?

As the years go by we learn the emotions and mind training that involves an effort like this; the biggest challenge about building for the Faire is not the actual prims nor the technique, but the expectations we lay upon ourselves. Building for Fantasy Faire itself is a chain of common support, it’s not about individual sims, it’s not a competition, but a dance. Every sim holds each other’s hand in a circle, it’s a mutual effort where the success of one world depends on the respect of the other one. We are all genuine fans of imagination and creativity resulting in art the winner over lag, restrictions, personal issues and low LOD factors.

The sims you visit every year are children created by our imagination, visually immersive stories adapted to SL capabilities where we become containers, they are a world for everyone, but they do not exist without the eye with which they are seen and experienced. This is mainly the reason that makes me come back: contributing with my imagination and giving a world for others to experience while being part of an incredible huge virtual effort that allows me to help in a consistent manner a cause I believe into.

How many Fairelands have you built? Tell us about them, is there something that ties them together as a theme, as a development?

This is the 4th year I build a sim (Enchanted Mysts, Tides, Magnificat, Sanctum), the 5th year I sponsor a sim, and 6thyear I participate to Fantasy Faire.

The thread that connects my worlds is visual and emotional, what I wish for visitors is immersion, a song that follows them through the walk, a poem of scenarios, colors, images and sounds to make them think, feel and live there, for a while. A living book where everyone can read what their mind is focused at.

I enjoy reproducing classical architecture and landscaping I am familiar with, being European I love taking the heritage of old stones and ancient gardens and their growth and offer them virtually, then add a symbolic twist that is the tool to bring a concept to life, a metaphor.

I don’t believe much in explaining my creations as well as sim builds, I use too many metaphors and symbols that would make them look as intellectual philosophical exaggerations, prefer to let others see what they wish and enjoy perhaps a quiet garden or nice façade and wonder what is it all about, as we often do during our lifetimes: ask what it is all about afterall.

What are you bringing to the Faire this year?

What calls you to fantasy? When was the first time you encountered the genre and realized you enjoyed it?

I fell into fantasy without warning, on personal liking I was always more of a science fiction fan, expecially concerning books. From Herbert, to Anderson, to Sturgeon and Van Vogt I stopped sometimes only a moment over Howard, Martin and Tolkien, to immediately grab my latin classics which are my main passion. I believe also my love for classical art forms pushed my illustrative style over fantasy which tends to use old school canons of aesthetics, so I ended up working as fantasy cover artist and character designer RL mainly for my painting style. But what still drives me genuinely to Fantasy it’s the connection with epic ballads and legends, our historical imagination that is the base of all contemporary fantasy: most of it you can find in greek, celtic or scandinavian legends, so I wonder: did we really add anything new in the past 2500 years?

What are you looking forward to most this year?

Stability. The faire passed its initial newborn phase and started having solid foundations. A delicate phase of transformations made the Faire stronger and so all the backbone pieces that is the whole team is feeling more secure and less volatile. The faire is like a system of transparent layers, each of them is light and fragile, but when you merge them all it becomes a strong solid element. Fantasy Faire is all the selfless people taking part in it, from organizers to visitors, with visions, fantasies, emotions, battles and challenges: the real thing that glues us, we transparent layers, is the will to contribute and relay, giving further as an act of gratitude for being merely alive and able to imagine. I simply wish the Faire to live long and, well… prosper.

Friendship. Because it’s the most beautiful thing in the world and what makes Friends Fighting Cancer.

Good looking pretty girls. Because you expect me to say it and who am I to disappoint you.

How was Sanctum born? What inspired it, what is its story?

It was late January. I was taking 3 months of nomadic life in New Zealand, my personal other side of the world, mostly spending time in the rainforest, chasing penguins and whales and making the great tracks, trying to work along the way and paint non PG appliers in toilets with good wifi. While getting ready for the Milford sounds series of walks I got a very close encounter with some vampires (sandflies) that knocked me down for a week in bed drunk of antihistamines, and also simply drunk. Covered in plague and itching to the edge of insanity, sleep deprived most of time by getting woken up by the itch, in one of the rare spans I fell asleep I had a dream: I saw the Sanctum. It was louder, the chains were shaking, the souls were hovering and rotating in circles around the chapels and their noise and lament was unbearable. As I recovered, and happily continued my kiwi journey, Sanctum changed and became a land of peace. I gained consciousness that we all are heading for the same direction, the same journey, a shaky and unstable one between two fates, the hell of our regrets that keeps us chained and unhappy, or the one of acceptance, dancing with the scary death, which is the only big truth and final checkpoint. I realized that all I have to do is make it worth, my own journey, and try to contribute as best I can to improve life for others around me, which is all what life is it about.

Thank you, Alia, for taking the time to share your view of the Faire with us and thank you for bringing so many Fairelands to being.

And with this quote of J.R.R. Tolkien – the Fellowship of the Ring, my first blogpost on this wonderful site, about one of the most amazing events in SL starts…!

My name is Caitlin Tobias and I love the Fantasy Faire.

This afternoon (well for me it was afternoon) The Fantasy Faire 2014 opened its many portals to the eleven sims, filled with gorgeous buildings and shops.

As I stood on Sanctum the moment the Faire opened, I watched the people coming in. Some disorientated, some grey, some immediately started running.  I smiled and tried to blend in, just being an observer. With a camera.

Then, two little boys came near  where I stood – disguised as a statue – and I heard them discussing whether or not take the ‘stairway to heaven’, a name not invented by me or anyone, but it is what lots of people say when they see it.
And off they went, to the unknown, to the light. 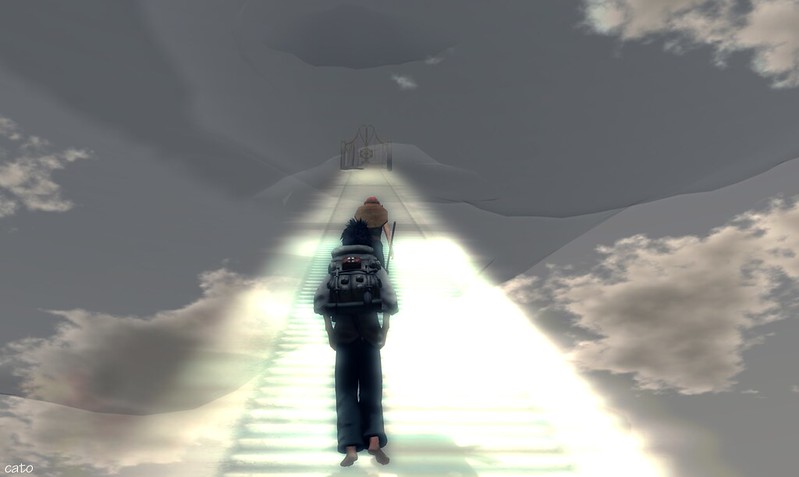 I am sure their journey will be good, and they will not get lost. And maybe one day, they will return from the Fairelands and tell the world about their adventures….Not all those who wander, are lost. 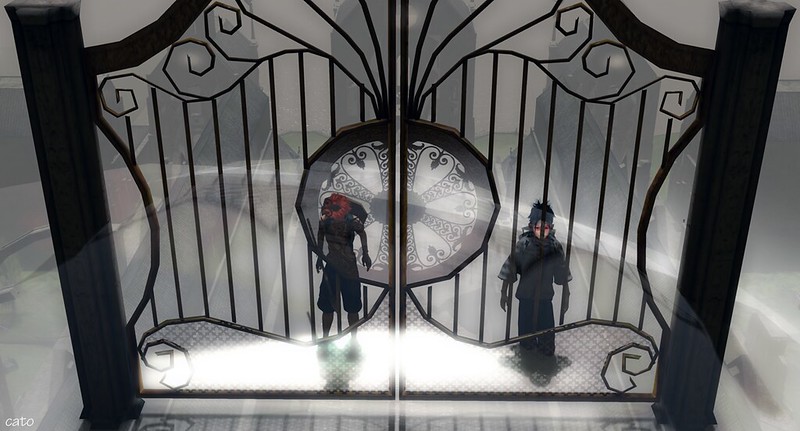 Credits:
* The two boys are Aleph Ceriaptrix and Pokute Burt – if you see them…say hi!

* My skin, dress and eyes : Lacrimosa by Fallen Gods Inc. on Sanctum
* My wings and hair: Stone Maiden Hair and Stone Wings (large) by Mac Moragh and Muse on Sanctum
* My hands are the Demon Hands by DRD
Pictures shot on Fantasy Faire – Sanctum

“My son, you’ve seen the temporary fireand the eternal fire; you have reachedthe place past which my powers cannot see.I’ve brought you here through intellect and art;from now on, let your pleasure be your guide;you’re past the steep and past the narrow paths.Look at the sun that shines upon your brow;look at the grasses, flowers, and the shrubsborn here, spontaneously, of the earth.Among them, you can rest or walk untilthe coming of the glad and lovely eyes–those eyes that weeping, sent me to your side.Await no further word or sign from me:your will is free, erect, and whole– to actagainst that will would be to err: thereforeI crown and miter you over yourself”