A city stands on the edge of sand and water.
Caravans enter by sand. Boats exit by water

A city between life and death.
Some may ascend to higher planes. Others will leave by boat

“Why do the gods share it with us?” he had asked his father. “Why not keep it for themselves?”

“Is that what you would do?” his father had asked in return. The set of his eyes and the flick of a horse hair lash to shoo away a fly had told the boy how to answer.

“No?” And that had made his father laugh.

All these years later, looking across the Golden Delta of home he understood the answer to his question. The Gods share light with us to prepare us for the truth:

His son stands by his side and in this moment there are no shadows. Every instance passes, fades. But the waves that carry them along remain.

“Have what father?” his son asks.

“The answer. The secret.” 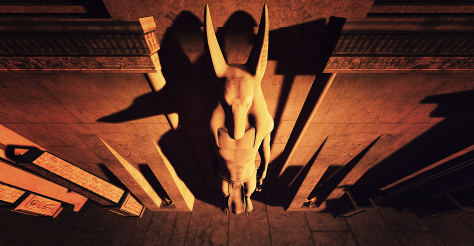 The sun burns down hot and golden;
Bright as the statue of Isis that crowns the obelisk.
Dust swirls between the walls
And sticks to my cheeks where the tears have run.
I have been a bride of Anubis.
I have served him all my days.
I search the sacred writings that adorn the walls
And know that he will test me…
And find me wanting,
Because I loved a human man
More than I loved my god.
I watch the boats on the river.
One of them holds the body of my beloved.
His shell returns to the Golden City.
He will be entombed within its heart.
But my heart breaks and I know
The Eternal Peace will not be mine. 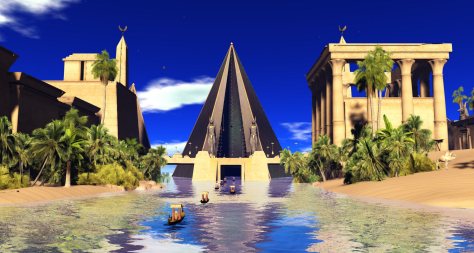 Where have all the crocodiles gone?
The river stands empty.
the sacrifices have ended.
The fires are slowly dying.
The courts are silent
except for the hiss of blowing sand.

Where have all the gods gone?
There are no more worshipers.
Do they die as well?
Or carry on,
shadows of their former selves
yearning for a whisper of a prayer.

Where has the belief gone?
In a world full of logic,
fear of offending,
lack of free thought.
Only those brave enough to dream
can believe in the magic
of what is seen, and what can only
be Imagined. 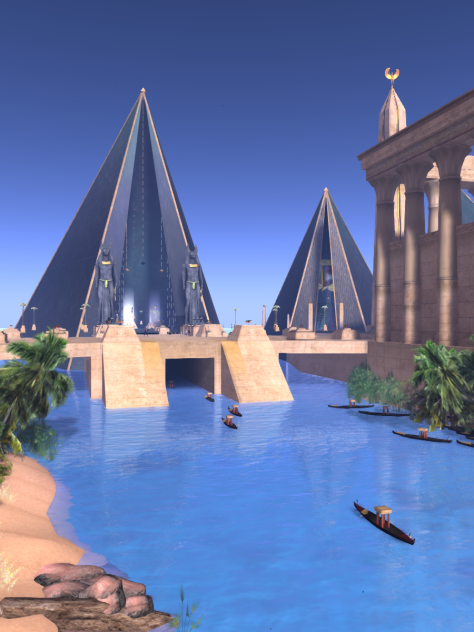 How many boats have drifted?
Canopic jars free to travel.
while heart left behind,
to center of a person’s being
safely wrapped away
encased in cold stone
scented,
protected
and warded,
accepting offerings from the living
Around you
sand dances for the wind
whispering
“You are worth the weight of a single feather
in the eyes of the gods.”
Throw off those wards,
loosen the wrappings
and open your heart
Old gods are watching,
waiting
while you waste time,
watching boats.
Life is passing.

Nedjes, Potter of the Golden Delta by Midnight Dae

“Nedjes, leave quickly, he’s coming down the street!” The camel herder’s boy skidded into the shop, bringing sand and dust along with him. Nedjes held up his hands in apology to his wife, he loved her dearly, but still backed out rapidly. With a sigh, she reached for a broom once more to clean out the dirt, and prepared to face the Vizier.

Many years ago, Nedjes had been so named as the smallest and youngest of the potters, but he never grew like his playmates, which meant that he was easy to bully. He usually found somewhere else to be when the Vizier arrived. Djau had hated him from the time they lived on the same street and wrestled in the dust. Nedjes still used the family rooms above the shop, but Djau was now an important man.

Nedjes hadn’t found fortune and power like Djau, but he was known as one of the most talented. When the last Pharaoh died, it was to Nedjes that the priests came for the best canopic jars. He had wanted to be a priest, had felt the magic calling to him, but Djau had used his influence to block Nedjes from the priesthood. He was declared to have no magical skills, and after the accident which killed his elder brothers, he had to take over the family business.

Nedjes remembered his brothers fondly, so he left the shop when he heard the warning. Losing his temper with Djau could cost his life. He retreated to the Temple of Anubis, where clean water and cool stone absorbed some of the heat from the day.

“Djau, dirtying his feet in the merchant quarter again?” The quiet voice of Padiasetthe priest greeted his hurried entrance.

“He’s down here every few days, harrying us over the deliveries for the Sacred Valley. He couldn’t stop us getting the contract, but now he pressures every ship owner in the delta to prevent us supplying them!” Nedjes pounded the bench onto which he had flopped, causing a passing acolyte to jump in fright. Padiaset waved the boy on, remembering when he and Nedjes had been acolytes, in awe of the temple magics and whirling at every sound.

“I still have the papyrus which confirms you have no magical talent whatsoever,” he said thoughtfully. “Signed by the Head Priest and with the seal of the Vizier. It’s an impressive and authorized legal document.” The friends smiled.

Later that day, Djau questioned every priest with a truth stone. Spitting out his anger, he raged among them, flanked by his largest guards. All denied being powerful enough to accomplish one of the Great Spells. The Head Priest protested the inquisition, and confirmed what the gentle green glow of the stones had shown, no-one at the temple possessed such talent. Wisely they all praised the power of the Pharaoh, who must have ensured his priests received their supplies.

From the shade of the palm trees, Nedjes and his wife watched the silent procession of boats and smiled. Each boat magically appeared from beneath the Great Temple and carried a canopic jar safely to the Sacred Valley.

The Third Handmaiden to the Left bowed low when the Pharaoh passed, her eyes lowered to the ground so to not grace even the edge of Hatshepsut’s slippered feet as she passed. When the echo of her steps vanished, she joined the other women in gathering up the thick mats of reeds, piling them up in a corner of the room so the room could be swept clean again, and then she was free! Most of the others were gathering in their small groups, chattering brightly; she joined their numbers long enough to be remembered, moving from group to group for plausible deniability, and vanished into a narrow fissure in the stone while everyone was looking somewhere else.

He was waiting by the shoreline, his boat pulled up and turned to resist the inexorable tide, the shadow of Bastet’s head concealing the expression on his face as the sun set across the sands. She felt his smile against her skin as she flung herself down from above, his arms wrapped around her hips, his face pressed against her stomach as he swung her in an arch and let her slide down his body, smothering her laugh in a kiss. It was several moments before anything passed between them but breath – and even then their voices were ragged with laughter and passion.

“I missed you.” said one voice.

“Today seemed to last forever,” replied the other.

“Will anyone miss you?” they asked together.

Off in the distance, the high pitched echo of a howl signaled the movement of jackels, hunting for prey in the cool of the night. In the wake of that cry, he pulled her toward the river, her delicate kalasiris already slipping from her shoulders to be left abandoned on the sandy shore. His shenti was even less of an impediment, shed with eagerness as both washed away the heat of the day, relaxing into the Nile and each other. In the darkness, their bodies and spirits became one and the river surged around them, bringing life to the desert once more.

In his cave nearby, Hapi, the Lord of the River Bringing Life, smiled. 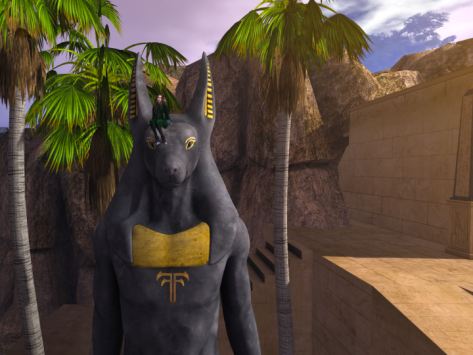 Well, first of all, it’s too fucking sunny here. Delicate drow skin, even when expertly painted by one of the amazing women at 7 Deadly s{K}ins, is very delicate. I still can’t seem to change from my drow skin, probably thanks to Herself’s magic or something, is really not handling the sun and sand of this Golden Delta well. I hope they assign me someplace shady tomorrow.

The Realm seems amply protected by magic, so I don’t know why they need me here anyway. I haven’t been issued a staff yet, so I’m armed with only a dagger and a sharp tongue.

You can read more at: https://threetwistedknots.com/2016/04/22/assignment-the-golden-delta/

“There,” said Ink-tan, leaning back a little from his workbench. “You see?”

Atnos-tan leaned forward, conscious of the stiffness of the new sandals on his feet, how the hessian robe scratched his neck and arms, and how the leather band, designed to hold his hair out of his eyes, was too tight and made his forehead sweat.

“Yes, Father,” he said obediently, but Ink-tan slapped his hand down on the wooden bench in sudden fury, making the sand fly up and Atnos-tan want to sneeze. He shrank back a little.

“Master,” growled his father. “In the workshop, I am your Master. Do you understand?”

“Then watch,” his father-master said, and went back to rubbing the harsh brush of the fried kokan plant against the sandstone jar before him on the bench. Slowly, under his skilled hands, a pattern was emerging, and a face. When it was completed, it would be ready to hold the bones of a great nobleman who needed to make his final voyage to the afterlife in an urn with a recognisable face, for how else would the gods know his true worth?

Atnos shuffled from sandal to sandal but tried to do it quietly. When his Father had said he was now ready to serve in the workshop, he had imagined that he would be bringing home his first work to show his mother. Instead he had been told to stand and watch. The most exciting time of the day had been when he swept the floor clean of sand, and his father … master had said even that was not good enough and made him do it again.

Behind his father’s head, from this angle, was the frame of the solid stone door, with those curious symbols carved into them. He remembered when he was very small asking his father what those symbols meant. But Ink-tan could not read.

Now Atnos-tan stared at the frame and at the blue patch of sky, and thought he could hear the shouts of Jokki and Lania, playing by the blue, blue water. Did they miss him? They had nearly finished the reed boat they had planned to take out on the river … would they wait for him before they set sail? By the time his father closed the workshop it would be nearly supper time.

“Don’t sigh like that,” said his father. “You may ask me questions, you know.”

His sand-scored hands added pressure to the kokan, tracing what was becoming the line of a nostril. Despite himself, Atnos leaned in a little, intrigued. Yes … he could see the proud face, the harsh lines between nose and lip.

There was a long pause. The brush swept to and fro, accentuating the line, making it almost a sneer.

“No,” said his father at last. “But great men prepare their monuments early, less they be forgotten.”